The Music in the Glen CD is out now!
You can buy it directly from us by clicking the Buy Now button and paying with PayPal.
£12.99 – includes International Shipping
Payment processed by PayPal (All Major Cards accepted) 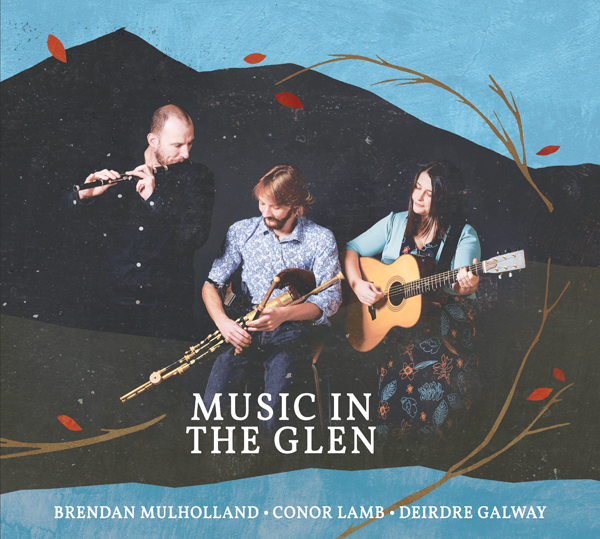 Thanks for your support!

For Digital Downloads and other purchasing options please see the links below.

“Wind, reeds, and rhythm are the cornerstone of Music in the Glen. What a beautiful sound these three powerhouse players have created on their debut recording. Sophisticated and superbly executed arrangements, combined with the all-important magic ingredient: ‘respect’, which is at the heart of everything they play. In a nutshell, this is incredible music!”

Featuring the combined talents of Brendan Mulholland (flute), Conor Lamb (uilleann pipes, whistles) and Deirdre Galway (guitar), this exciting new trio unite their love of Irish music with a polished performance and respect for the tradition. Through haunting airs, lively dances, ancient melodies and new compositions, they bring colour and depth to their music with precise unison playing, complimentary harmonies and an infectious confident energy.

Take three outstanding exponents of traditional Irish music … musicians with pedigrees as long as the proverbial arm, add a subliminal understanding of their art and an intense mutual empathy … and the result is bound to be special. That’s exactly what you get with Music In The Glen, stunning music with Music in the Glen album cover intricacies of expression that that build on the foundations of a rich heritage ultimately adding up to an exceptional album.

As with all traditional Irish music there’s a powerful and enduring mix … vibrant expression, gentle sometimes sorrowful reflection, deeply thought communication. ‘Music In The Glen’ produce an outpouring of exuberant nuances, a blend of sensitivities and elusive complexities. Their interpretations of reels, jigs and slides pull you immediately into a maelstrom of energy and inventive high-spirits while their gentle expressions of airs and waltz reach deep inside your heart. The album treats you to ‘The Sweetheart’ and ‘The Shaskeen’ reel sets, ‘The Sister’s Cat’ set of jigs and the delicious ‘The Wounded Hussar’ waltz and the beautiful ‘Lament For Limerick’ air.This is an exceptional trio delivering excellent Irish traditional music.

Thirsty for Irish traditional music? Listen to Music In The Glen!

Take a fish out of the water and it will struggle to find its way back. This is what Traditional Irish music is like to true lovers of the genre-we thirst when we have been deprived for so long!

Music in the Glen is a new album by the trio of Brendan Mulholland (flute) and founding Réalta members Conor Lamb (uilleann pipes, whistles) and Deirdre Galway (guitar). Check out the album liner notes for more info about the background of each track and also the contributing artists.

I admire the clarity of each instrument and the passion that all contributing artists have put forth in this project. You have fast and slow tracks creating a balance of mood all throughout this recording. I’ve already featured these musicians previously, Brendan Mulholland (with Jen’s Hill and Tuned Up), Conor Lamb and Deirdre Galway (for Réalta). So you see, I expect nothing less and my excitement has been rewarded with a grand listening experience which makes me smile track by track.

Music in the Glen has eleven tracks. Reels, waltzes, jigs and airs all featured with creative twists and turns that make traditional music such an exciting experience to listen to. My personal faves are The Sweetheart (because I am writing this on a Valentine’s day), Lament for Limerick (because it is not often to hear a piano in a trad recording), My Sister’s Cat(listen to the instrumental duel between Mulholland and Lamb starting at 2:13, and how I held my breath until Deirdre Galway resolved in with her guitar, I think I died there!) and many more.

If you are a purist or just new to Traditional Irish music- or just trying to learn how to play the instruments; then get this album! I assure you that you will enjoy it.

There’s always a lot going on in the traditional music scene in Ulster, and here is a new grouping that will immediately show how vibrant and fresh that scene is. Here we have the combined talents of Brendan Mulholland, flute, low whistle; Conor Lamb, uilleann pipes, whistles; and Deirdre Galway, guitar. In addition, guesting are Christine Galway, piano; Neil Martin, cello; Dónal O’Connor, keyboard; Fintan Mulholland, snare drum; and Dermot Moynagh, bodhrán.

The trio’s homelands are the counties of Antrim and Down, and this is strongly, but not exclusively, reflected both in their styles of playing and their selection of tunes. There are new compositions as well as older ones, but no matter the provenance, the unifying strand here is the tightness of playing, the understanding between each other and the technical precision. There’s also loads of passion, empathy and respect going on here, too. It can be difficult sometimes for whistles or even guitars to get themselves heard in the presence of uilleann pipes at full blast, but top marks to Dónal O’Connor’s mixing and engineering, which ensures every note is as lovingly reproduced as it was produced in the first place.

There’s a fine selection of driving sets which never sacrifice subtlety for pace, and moody and languid interpretation in the likes of the Lament For Limerick, which all combine together beautifully to produce an album which is surprisingly their first after some 20 years of collaboration.

A superb first release which augurs well for the future.
www.musicitg.com
Gordon Potter

Out to Lunch has rarely seen such a packed and enthusiastic audience than that for the Music in the Glen CD launch this January.

From the opening notes to the (two) standing ovations, it was truly one of those show which will live long in the memory.

The ensemble have announced themselves with some style and look poised to join the pantheon of great Irish Trad acts.